By the time Chribbs was operating a bakery at Wilkinsonville, his family included daughter Hannah, and probably daughter Eliza and son John, along with the eldest daughter Mary. (Note 1.) Assuming that the information chiseled on her gravestone is correct, Hannah was born May 14, 1800. (Note 2.) Considering her father’s activities, it is likely the family was living at Fort Massac by that time and she was born there.

The first documentation of where settlers were living adjacent to Fort Massac is a Register of Applications and Permissions compiled by the federal land office at Kaskaskia in 1807. (Note 3.) That document reported more than a half dozen households within a mile downstream of the fort, including the fort’s commander, Capt. Daniel Bissell, and Z.M. Pike, which probably refers to the son of the prior commander. (Bissell and Pike did not submit applications, but the locations of their houses were mentioned.) The names listed were not property owners but rather “squatters” who had made applications (on September 18, 1807) to live on federal land and received formal permission on December 1, 1807. 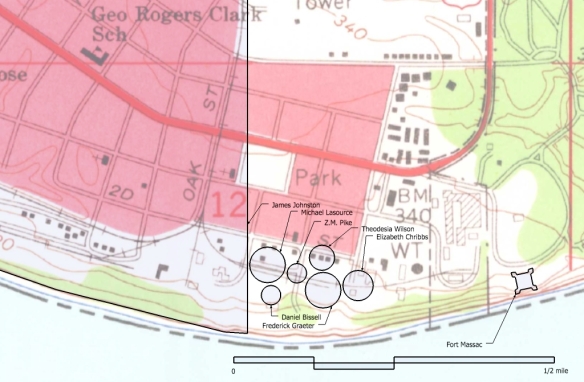 The accompanying map shows the comparative locations of the settlers and size of their claims as described in the land office register. The Chribbs household was immediately adjacent to Fort Massac but exactly how close to the stockade itself is not known. The various households may also have been spread out more than depicted. James Johnston, however, was granted permission for all of the southwest quarter of section 12 as part of his total claim to 320 acres.

By the time the land office submitted its report, Alexander McNair had also submitted a late application that included the Bissell residence, so it appears that he was living between Michael Lasource and the river.

Later in life, Hannah apparently reported to census takers variously that she was born in Ohio or in Pennsylvania. (Note 4.) But it is quite possible that Hannah didn’t really know where she was born. Although her mother lived until Hannah was about 40 years old, Elizabeth may not have been forthcoming about the family’s life at Fort Massac. If so, she had good reason—the family had disintegrated there in a particularly humiliating way.

But before those events took place, Chribbs enjoyed a brief period of honor.

Tax revenues for the federal government were received by a network of collectors distributed throughout the country. The collector who was in charge of each district was a presidential appointee, subject to confirmation by the Senate. The district where Fort Massac was located served as the country’s western port of entry at the mouth of the Ohio River. In 1801, the collector for the Massac district resigned, resulting in a vacancy to be filled by an appointment by the new president, Thomas Jefferson.

In an October 6, 1801 letter to Jefferson, Treasury Secretary Albert Gallatin made what amounted to a recommendation that William Chribbs be appointed. (Note 5.)

The situation of the revenue district of Massac renders an appointment necessary. The resignation of Mr. [James] Irwin shows the difficulty of finding a proper character to reside there. Mr. Chribbs had been recommended by Mr. [William C.C.] Claiborne next to Mr. Irwin. The two enclosed letters are also in his favour. No other application has been made.

In 1797, Claiborne had been elected to the U.S. House of Representatives from Tennessee. He served in Congress until 1801 when he was appointed governor of the Mississippi Territory. How or where Chribbs had encountered Claiborne is not known, but it suggests that Chribbs had been doing business in Tennessee prior to 1800.

President Jefferson accordingly appointed Chribbs to the post on October 8, 1801. Because the Senate was not in session at the time, it was a recess appointment, and no confirmation process was initially required.

The certificate of appointment ultimately came into the possession of a Tennessean, Jacob McGavock Dickinson (1851-1928), whose papers were donated to the Tennessee State Library and Archives after his death. (Note 6.)

The certificate is noteworthy for bearing original signatures of both President Jefferson and Secretary of State (later President) James Madison. (Note 7.) How Dickinson may have come to acquire it is unknown. There are no other items that refer to William Chribbs among the Dickinson papers, and the certificate is not related to any of the other items in the collection.

Chribbs served as collector for only about a year. Whatever his shortcomings or malfeasance in office might have been, Secretary Gallatin was a harsh critic, to say the least. Here is what Gallatin wrote in a July 2, 1802 letter to President Jefferson. (Note 8.)

Will the President enquire from Gen. Dearborn whether Mr Lee is proper to succeed Mr Gerry, as Collector at Marblehead, and whether he has any objection to the commanding officer at Massac being made Collector. — Chribbs the present collector is infamous & must be removed but the place is so unhealthy that no other person will go and live there.

It is also proper to inform you that the appointment of Chribbs, collector of Massac, though it rested on respectable recommendations, was an unfortunate one; it having been ascertained that his general character renders him unworthy of the trust. Major Swan, Postmaster General, has communicated circumstances on that point, which are decisive; the only difficulty, is that of finding a successor, there being no settlement in the vicinity of Massac, and the spot being considered as unhealthy.

As the case will not, however, admit of delay, it is submitted whether, considering the particular situation of that port, it may not be proper to appoint, with the approbation of the Secretary of war, the commanding officer of the troops stationed there, who is represented to be a suitable character.

Then, in a July 24, 1802 letter to President Jefferson, Gallatin used the ultimate slur to describe Chribbs. (Note 10.)

I have written  to the Dept. of State in order that they should transmit to you for your signature commissions for the port of Massac, (vice Chribs the horse thief) . . . .

Exactly when Chribbs’s service as collector ended is not known. As suggested by Gallatin in his July 2 letter, however, Chribbs’s replacement was the commanding officer at Fort Massac, Captain Daniel Bissell.

In what may be the Treasury Department’s final statement about Chribbs’s service as revenue collector, a subsequent Secretary made the following report to the House of Representatives in 1856 under the heading “Debts and claims on account of customs prosecuted to insolvency, or otherwise lost.” (Note 11.)