William Becknell died without leaving a will. On December 29, 1856, William A. Becknell, Jr., was appointed administrator of the probate estate, and Ambrose K. Ellett, John Robbins, and James H. West were appointed as appraisers. (Note 1.) On the following January 26, William Jr. reported the following inventory of his father’s property, with values reported by the appraisers. (Note 2.)

This did not include property in Titus County, which was reported on February 9 as the following. (Note 3.)

As widow, Mary Becknell owned half of the couple’s property but was also obligated to pay half of their debts. (Note 4.) In February 1857, Ellett and West, the court-appointed commissioners, filed a report that described boundaries of 1352-1/2 acres at Becknell’s Prairie that was to be set off as her property, along with the following personal property. (Note 5.)

The division of land would later be substantially revised, as described below.

In their report, the commissioners also assigned ownership of three of the slaves to her.

We further report that we have set apart to said widow Fifteen hundred dollars worth of the negro property to wit old Martin, Phillis and young Martin and in doing so have taken into consideration that they are of one family and though it is more than her portion of the negro property we have made up the difference to the Estate out of the widow’s portion of the personal property, which is satisfactory to the said Mary Becknell and we believe cannot operate to the prejudice of the Estate it being of such nature that we deem it impracticable to divide equally between the others heirs and will therefore have to be sold for division.

On March 20, 1857, a public sale of the other personal property was held. Buyers included son-in-law J.K. Rogers and son-in-law James Collins, who bought the cattle. (Note 6.) On November 30, at a public auction Leonard H. Norwood bought the Texas land certificates for 68 cents per acre, and William Guest bought the U.S. bounty land warrant for $127.20. (Note 7.) The buyers at these sales generally did not pay cash but instead signed notes for payment a year later. (Note 8.)

At the same time, William Guest and attorney Joseph J. Dickson sought appointment as the replacement administrator of the elder Becknell’s estate. (Dickson had been serving as attorney for the estate.) Their requests were “contested”—apparently by Mary Becknell, who herself was appointed as administratrix de bonis non on the same day as Malinda’s appointment. (Note 11.)

For a time, the slave Harvey had been doing work for William Jr. but was destined to be sold so that the proceeds could be split among the elder Becknell’s heirs. (Note 12.) The sale finally took place on January 4, 1859, with Lorenzo D. Henderson paying $1730. (Note 13.)

By that time, it had become apparent that the initial division of the Becknell’s Prairie land had been erroneous, and it was challenged by William Becknell’s heirs. (Note 14.) For one thing, the division was made without regard to the differing values of the various areas within the four square miles. For another, the portion assigned to Mary Becknell included the place where John and Mary Jane Rogers had built a homestead and where he and his family still lived. (Note 15.) Newly appointed commissioners A.K. Ellett, J.M. Baker, and John Scaff and surveyor William D. Orr undertook a new partition of the land.

Map of the Survey of William Becknell with Division between the Heirs (Red River Co., Tex., Deed Book X, p. 534)

On January 28, 1859, the commissioners submitted the new property division. (Note 16.) They reported that the actual size of the property—after setting off the 1000-acre Sappington parcel—was 2536 acres. Along with property descriptions for each of the parcels, the commissioners also provided a map of the survey. Although the map was not reproduced in the probate record books, it was filed many years later in the property records, as shown in the accompanying image. (Note 17.)

The land was divided into seven parcels as follows. 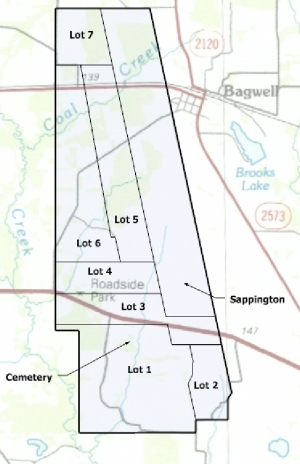 By late 1859, at least some of the heirs were pressuring Mary Becknell to pay out all of the monies due from the estate. (Note 18.) Although much of the work was to be done by her attorney, Benjamin H. Epperson, it required her attention as well. That year, she was 67 years old. 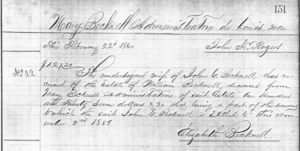 By that time, of her five children, three had died (William Jr., Mary Jane, and Lucy) and one (John) had left the state. The fifth child (Cornelia) had been widowed with children although remarried. Mary Becknell had about 20 grandchildren living in the area. Except for the Collins children, all of them had lost at least one parent.

Within several years after arriving in California, John was living with another emigrant from Texas, Electa Morris, and her young daughter Bedora. (Note 21.) Electa Stowell (born about 1823) had married Joseph Morris, a butcher by trade, and in 1850 they were living in Lamar County (Paris), Texas, with three children born from 1840 to 1845. (Note 22.) The records suggest that the Morris family also emigrated to California in the mid-1850s where Bedora was born in 1855 or 1856.

By 1857, however, Electa and John Becknell were together, and their son John Carrell Becknell was born by 1858. According to the 1880 U.S. Federal Census, the Morrises had divorced. (Note 23.) 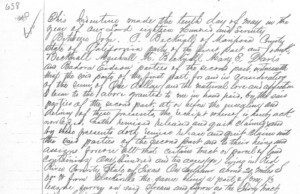 The 1870 U.S. Federal Census for Mariposa County, California, listed the value of John Becknell’s property as $500 in real estate and $4400 in personal property—presumably livestock. That year, he also executed a deed that transferred ownership of his land in Texas on the north side of the Sulphur River to four of the children he had left behind: sons John Kirtey and Marshall Mayfield and daughters Mary Elizabeth (now Davis) and Madora Cornelia (now Eidson). (Note 24.)

John C. Becknell’s name appears in numerous California records until his death there in 1893. 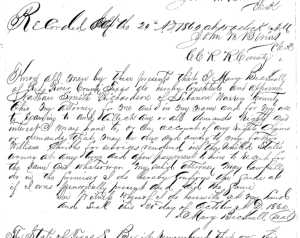 After her husband’s estate was finally settled in 1860, Mary Becknell was left with substantially diminished financial resources.

Perhaps she was looking for any possible source of funds, no matter how remote, when she engaged Nathan Smith Richardson of Lebanon, Ohio, to collect anything that might be owing to her father by the federal government. (Note 25.) On October 24, 1860, she signed a power of attorney, which notably spells her maiden name the way her father did:

I Mary Becknell of Red River County, Texas do hereby constitute and appoint Nathan Smith Richardson of Lebanon, Warren County, Ohio, my attorney . . . to examine and collect any or all demands rights and interest I may have to, or on account of any rights claims or demands that may be due and owing to my father William Chribbs for services rendered in the United States Army at any time . . . .

That same year, Mary Becknell wrote a letter to her sister, Hannah Evans, who was still living in Missouri. (Note 26.) Only a partial transcription of the letter has survived, which is reproduced in full on the page “1860 – Mary Becknell’s Letter to Her Sister.” The letter describes her views on international relations, particularly with Britain and France, and the tensions between the North and South. 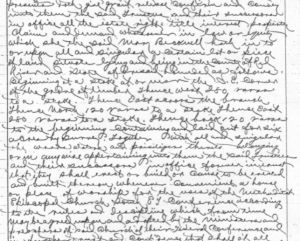 The following year, Mary Becknell gave six acres of her land to her church—the East Texas Conference of the Methodist Episcopal Church South—for the purpose of building a “house or place of worship” and for a burial ground. (Note 27.) The boundary description in the deed relies on the location of stakes so can no longer be plotted but probably included the spot where her husband had been buried (marked “Cemetery” on the map depicted in Part XI). The place is now memorialized by twentieth century markers and is visible from U.S. Highway 82.

In 1862, the year after her property donation, she made out her will. (Note 28.) A complete transcription is included on the page “1862 – Will of Mary Becknell.”

Her land was to be sold to the highest bidder. She left $500 for “Building a meeting house” on the land she had given to the church and money for erecting monuments for the graves of both her husband and elder son. She left her three slaves to her daughter Cornelia along with $500 “for the support of the old negroes.” She made particular provisions for certain of her granddaughters (Mary H. [Adeline] Evans, Sally [Sarah] Evans, Ann Eliza [Smiley] Turnbull, Lucy Jane [Smiley] Turnbull, Elizabeth Malinda Becknell, and Margaret Frances Becknell) and $2000 to her son John—but apparently on the condition that he return to Texas. To her sister Hannah Evans (if she were to move to Texas), she left $500 and a silver sugar dish. Any remaining money from the sale of her land and personal property was to be split among her surviving children and grandchildren.

Mary Becknell died April 25, 1864, and her will was filed for probate the following May 30. There is no indication that markers were provided for her husband’s and son’s graves as she had requested. It also appears that the Methodist Episcopal Church never took ownership of the land she had given, and no church was built there. (Note 29.)

Mary Becknell’s slaves would have received news of their freedom not long after June 19, 1865, the date known as “Juneteenth.” Five years later, the probate of her estate had barely progressed. Martin and Phillis, who took the Becknell surname, continued to live in Red River County, although they are not to be found in the 1870 census, nor is Phillis’s son Harvey. At the time, Martin Jr. was reported to be living in the county with a Henderson family. (Note 30.)

Meanwhile, Cornelia was the fourth of the Becknells’ children to die young. Descendants believe that she died in 1868 at age 40, perhaps at the birth of Dora, her ninth child (and her sixth by James Collins). (Note 31.) She had certainly died by 1871, when Martin and Phillis filed a claim against Mary Becknell’s estate to get the $500 that Mary had designated in her will for their support.

The former slaves were represented by Reuben R. Gaines of the Clarksville law firm Gaines and Wooten. (Note 32.) Gaines had apparently worked out the matter with Benjamin Epperson, who was still serving as the executor of the estate. On February 21, 1871, the petition and an agreed order were presented to the court, and the judge signed the order. (Note 33.) A complete transcription of these documents is included on the page “1871 – Claim by Martin and Phillis Becknell.”

More than six years after Mary Becknell’s death, very little had been distributed to anyone from her estate because none of the 922 acres of land—which made up the great majority of the estate’s value—had been sold. Whatever the reasons for the delay, Gaines ensured that the land sale could proceed by incorporating provisions in the February 1871 court order that authorized piecemeal sales. Epperson began selling parcels the following month. (Note 34.)