In 1846, the year after Texas was admitted as a state, the territory of Red River County was subdivided, with a portion south of the Sulphur River (Sulphur Fork) established as Titus County. Parts of the Becknell family lived in Titus County for a number of years, but tracking them there in detail is impossible. The Titus County courthouse burned in September 1895, which resulted in the destruction of the county’s first 50 years of records. What can be learned about the Becknells’ activities must come from other sources. (Note 1.)

At Becknell’s Prairie west of Clarksville, the Becknells may have found themselves farther off the beaten track than they wished. By 1850, their center of activities had shifted about 20 miles to the south where John Becknell used his headright to obtain a land grant spanning the Sulphur River. (Note 2.) When, exactly, he sought title to this tract of land is not apparent from surviving records, but in November 1850 he obtained a 10-year charter from the Titus County Commissioners’ Court to erect and operate a toll bridge across the river. (Note 3.) A bridge was constructed that became known as Becknell’s Bridge. (Note 4.)

Operating a toll bridge required a continual presence—any absence meant lost revenue. By September 1850, John’s parents were living on the Titus County side of the river near his bridge. (Note 5.) One might imagine that they assisted their son in manning the bridge.

John had married Mary Elizabeth Guest about 10 years before, and their five children were born between about 1842 and 1851. (Note 6.) The family does not appear on the 1850 U.S. Federal Census.

Similarly, William Jr. had married Malinda Elizabeth Click by about 1840, and they had five children between about 1840 and 1857. (Note 7.) This family likewise is not listed on the 1850 U.S. Federal Census.

The youngest Becknell daughter, Cornelia, married William Evans as early as 1843 when she was only 15, and the oldest of their three children was born about that time. (Note 8.) It is conceivable that her husband was her first cousin, William B. Evans (the second son of George and Hannah Evans), born about 1820. (Note 9.) Other family histories list the middle initial of Cornelia’s husband as “H” although the basis for that is not known.

Contemporaneous documents suggest that it was William B. Evans (whether or not Cornelia’s cousin) who married into the Becknell family. In November 1845, Evans and John K. Rogers borrowed $100 from Thomas J. Shannon and secured their loan through a deed of trust. The property deeded to the trustee (Edward West) was a 13- or 14-year old slave named Washington. (Note 10.) The following month, Evans and Rogers borrowed another $49 from Shannon and secured the additional loan with another deed of trust to Edward West, this time a five- or six-year-old girl named China. (Note 11.) Shannon made these loans during the time that he was holding William Becknell’s 1000 acres as trustee for Dr. John Sappington as described in Part X.

Whoever Cornelia’s husband was, he apparently died by 1850 because he is not listed on the U.S. Federal Census that year. His family is listed, however, as shown in the image above, living next to William and Mary Becknell in Titus County. (Note 12.)

The federal census for that year also lists four slaves of the Becknells, generally corresponding to individuals previously described although the ages are somewhat inconsistent. (Note 13.)

In the meantime, John and Mary Jane Rogers and their family remained in Red River County, perhaps the only part of the Becknell extended family living at Becknell’s Prairie. (Note 14.)

William Becknell had never shown much desire to engage in farming or to run any other ongoing business venture of any sort, and there is no evidence that he did much to develop his large landholding at Becknell’s Prairie (about 2500 acres) during the decade or so that he lived there. The only indication of financial success in Texas is a tax list showing that he owned 215 cattle and 39 horses in 1845 (when he turned 57). (Note 15.) Whether those numbers represent real wealth is difficult to know without more information about his debts and expenses. Ranching at that scale required manpower that may have been provided by his sons and perhaps his sons-in-law.

One would expect that Becknell’s own ability to work cattle had diminished as he approached 60 and, by 1848, he had suffered an injury that completely ended his active life. In his own words, he had been rendered “an intire cripple for life” and would never again “be able to ride on horseback.” (Note 16.) The statements were made in a September 1849 letter to Thomas J. Rusk in which Becknell was attempting to reach a settlement of some cattle business. The letter portrays Becknell’s need for cash, including to pay for his “Dr. bills.”

This sad circumstance would seem to have prompted Becknell at that time to abandon ranching on his Red River County property and relocate to his son’s land on the Sulphur River.

The French Icarians in Texas

At about the same time, the Becknells encountered a group of utopian French settlers who made a brief, doomed expedition into north Texas. In the late 1840s, the French politician Étienne Cabet inspired and led a socialist movement known as Icarians who planned to put their ideas into practice in America. The first group arrived in New Orleans in March 1848 and set out for present-day Denton County, Texas, where they intended to establish their settlement. Only a few made it that far, and those who did concluded that their efforts were a failure and returned to New Orleans by the end of the same year. Cabet himself arrived in the U.S. in January 1849 and ultimately led those who still wanted to attempt an Icarian settlement up the Mississippi River to Nauvoo, Illinois.

The Becknells recorded encounters with the Icarians during what must have been their 1848 travels through northeastern Texas. In 1860, Mary Becknell wrote a letter to her sister, Hannah Evans, with the following passage. (Note 17.)

About twelve years ago there was a French Count came to our house. Mr. Becknell was out about some business and the subject of conversation as usual was the annexation of Texas to the United States. After telling all the advantages that would have accrued to Texas by a treaty with the French people of commercial intercourse he said the French people said let them extend their territory and they will become divided among themselves. 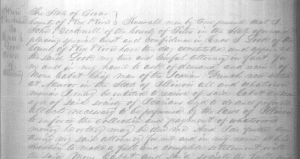 The “French Count” was apparently not Cabet, who did not travel to Texas, but another of the Icarian settlers.

During the Icarians’ journey through Red River country in 1848, John Becknell provided them assistance of some sort with the result that they ended up in debt to him. In 1850, perhaps because the Icarians were no longer in Texas, he executed two powers of attorney for the purpose of recovering the debt from the Icarians, who were by now living in Illinois. (Note 18.) The two documents have nearly identical text. In the second, he stated that he

constituted and appointed the said Look my true and lawful attorney in fact for me and in my name to ask of, demand and receive of Mons. Cabet Chief man of the Icarian French now settled at Nauvoo in the State of Illinois all and whatever monies I may be entitled to receive of said Cabet as manager of said society of Icarians . . . .

Whether his claims were pursued in Illinois has not been researched.

Although John Becknell now had a wife and five young children and a new bridge business, he soon departed for California leaving them all behind. His departure was apparently about 1853, which was when he executed a more general power of attorney to William Guest, probably his brother-in-law. (Note 19.) The document was signed 100 miles to the west in Grayson County (present-day Sherman).

The evidence suggests that he abandoned his family in Texas and started a new family in California with the previously married Electa Morris and her daughter Bedora. (Note 20.) The subsequent destruction of Titus County records makes it impossible to research any divorce proceedings there, but documents surviving elsewhere show that Mary Elizabeth Guest Becknell continued to be treated as his wife—not his ex-wife. 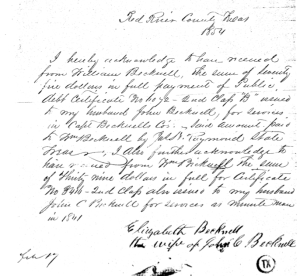 For example, in 1854, she signed the receipt shown here for payments made by the State of Texas to her “husband John Becknell” for two periods of his militia service. She signed the receipt by writing her own name and, below it, adding “the wife of John C. Becknell.” (Note 21.) Four years later, she signed another receipt—again as the “wife of John C. Becknell”—as part of Red River County probate proceedings. (Note 22.) That his departure was viewed as abandonment may also be reflected in his mother’s 1862 will, which included the following poignant provision: “Should John C. Becknell my son come home he is to receive Two thousand dollars from the proceeds of the lands . . . .” (Note 23.) 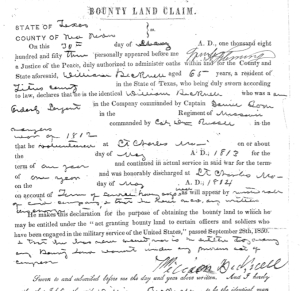 William Becknell was still living in Titus County in 1853 when he applied to the U.S. government for bounty land as the result of his service during the War of 1812. (Note 24.) His May 30, 1853 claim, which is pictured here, described his rank as orderly sergeant in the company of Missouri Rangers commanded by Capt. Daniel (Morgan) Boone under Col. William Russell. The document refers only to his first year of service (May 1813 to May 1814), not to his subsequent service under Capt. James Callaway.

On the reverse side, the document indicates that he was awarded a warrant for 160 acres.

At about the same time (1853), the Becknells’ widowed daughter Cornelia Evans married again, to James Collins. They would have six children through 1868 to add to the three children Cornelia already had. (Note 25.)

Although William Becknell’s financial resources continued to be modest, he paid to educate two of his Evans grandchildren, William and Sarah. (Note 26.) Their private teacher was William A. Ellett, who was only about 20 at the time. He would later become a lawyer and Texas legislator.

On April 25, 1856, when he was about 68, Becknell died. The Clarksville newspaper, The Standard, published an obituary the following day. (Note 27.) The piece is inaccurate in various ways but at least shows how Becknell was viewed in his community.

At his residence in this County on yesterday evening, at an advanced age, Capt. William BECKNELL.

The above announcement will cause feelings of regret to the first settlers of this County, as well as all acquainted with the deceased.

Capt. Becknell was the first that crossed the plains to Santa Fe—was elected Captain of the first Company that was formed in Northern Texas in 1836, and while in the Military service was elected Representative to Congress. Though his old age exempted him from military service, he was present and participated in most of the battles of the country. “The old man eloquent” delighted till the close of his life, to relate the events connected with the first settlement of Missouri, California, and more especially his last adopted [ ] Country, to the numerous participants of his hospitality.

We knew Capt. Becknell well for many years. He was a man of decided character great [ ] and firmness—a model of a pioneer, [ ] of the first trip to Santa Fe, was full of incident and suffering. His name appears various places in the Statutes of Texas [ ] a Captain of Rangers. Long before this in the War of 1812, and in the Black Hawk war, we believe he did stout service. The old pioneer is gone, peace to his ashes!