William Becknell and Mary Chribbs were married by the fall of 1814, perhaps during September of that year when he was on furlough and passed through St. Charles en route from St. Louis to Camp Clemson. Their first child, Mary Jane, was born by 1815, and the following year they were living in Howard County, Missouri, where Mary gave birth to their second child, William A. Becknell, Jr. (Note 1.)

Mary’s new husband (like her father William Chribbs) showed little interest in earning a living by farming during his early adulthood. Surviving court and property records suggest that Becknell was engaged in other kinds of business activities as soon as he arrived back in central Missouri after the war. Where he was engaged in acquiring property, it might have been done on behalf of others. Becknell may have been acting as their agent or as part of partnerships whose details are not fully known.

On August 12, 1817, Becknell became the first owner of Lots 52 and 53 in the newly established town of Franklin, Howard County’s first seat of government. (Note 2.) He never lived on that property, however, because by the time the deed was recorded the document included his April 25, 1818 assignment of the property to Thomas Golby.

But Becknell and his family were living somewhere nearby, if not in Franklin itself. On November 11, 1817, he served on a jury there in a civil case between Joseph Bayer and William Head. (Note 3.) The following year, Becknell was the defendant in another lawsuit at Franklin—accused of assault by James Riggs. (Note 4.) Documentation of the matter from primary sources may no longer be possible, but apparently Becknell was required to pay Riggs five dollars in damages. (Note 5.)

By that time, Becknell’s in-laws had also left the town of St. Charles. The Prichard family appears in the 1817 St. Charles County census as residents of Upper Cuivre Township. (Note 6.) The Cuivre (Copper) River flows past the present-day town of Troy, and the Prichards probably lived nearby. Becknell knew this area from his War of 1812 service, including at Woods Fort and Stouts Fort. And Prichard himself may well have been in the area during his own militia service in 1812.

Mary’s sister Hannah had also married by this time, to George W. Evans. (Note 7.) Although Hannah and George would later live near the Becknell household, they probably first lived at the village of Cote Sans Dessein on the bank of the Missouri River, where George bought a lot with the help of his stepfather-in-law in 1818. (Note 8.)

Eight miles northwest of Franklin and about a mile east of the Missouri River bottom was a salt spring. The location is now the Boone’s Lick State Historic Site, managed by the Missouri Department of Natural Resources.

According to DNR exhibits displayed at the site, this land had been granted to James Mackay by Spanish authorities in 1797, prior to American annexation of the Louisiana Purchase in 1803. In 1804 or 1805, brothers James and Jesse Morrison leased the land from Mackay and began producing salt in partnership with brothers Daniel Morgan Boone and Nathan Boone. The Boones sold their interest to the Morrisons by 1812 when the war forced operations to be halted, and the Morrisons resumed salt production after the war.

The two Morrisons were brothers of William Morrison, a wealthy merchant and landowner at Kaskaskia, and Robert Morrison, who had served as court clerk at Kaskaskia. James and Jesse Morrison are listed in various documents during this period as residents of the town of St. Charles, so it appears that they were not living at their salt works. As described in Part II, Becknell would have encountered the Morrisons at St. Charles in 1811 and was working for them at Boone’s Lick by the spring of 1812.

By December 1816, Becknell himself had entered into the salt trade by producing or purchasing salt he planned to transport downriver to St. Charles or St. Louis for sale. In order to do this, he (along with Julius and Ira Emmons) made arrangements with the merchant Joseph Robidoux for the use of a keel boat in the spring of 1817. Becknell and his partners were short on capital to pay for the boat, so instead they entered into an agreement with Robidoux to use one of his boats (and two of his hands) to transport goods for Robidoux from Fort Cooper in central Missouri to Fort Osage (near present-day Kansas City). After accomplishing that task, Becknell and the Emmonses would have use of the boat to transport their salt as far as St. Louis. (Note 9.)

At that time, Joseph Robidoux IV (1783-1868) was operating a trading post farther up the Missouri River near present-day Omaha and Council Bluffs. In the 1820s, Robidoux would begin trading at a site where in 1843 he would found the town of St. Joseph, Missouri.

For reasons that are no longer apparent, Robidoux didn’t provide a boat to Becknell and the Emmonses in the spring of 1817, and they sued him in Howard County that April. A transcript of many of the proceedings in that case are included on the page “1817 – Becknell v. Robidoux.”

The case was heard by a jury on November 15, 1817. Although both parties’ attorneys were there, Becknell wasn’t present when he was called to testify. As a result, he lost his case and didn’t recover any of his claimed loss. (Note 10.)

The following year, Becknell paid for a ferry license in Howard County, as shown on the accompanying listing published by the sheriff. (Note 11.) (Perhaps Robidoux’s failure to let Becknell transport his goods was related to the lack of a license.)

Various authors have suggested that Becknell ran a regular and ongoing ferry business at Arrow Rock, but there is scant evidence for that conclusion. (Note 12.)

Arrow Rock is the name of a bluff on the west or south bank of the Missouri River four miles west of the Boone’s Lick salt works. By 1818, the location had become the primary river crossing for travel west through central Missouri.

Above the river landing, the town of Philadelphia was founded. In 1833, it was renamed Arrow Rock.

At some point, Becknell acquired property four miles upstream from Arrow Rock that appears to have been intended to serve as landings for a ferry. (Note 13.) These two fractional quarter sections are at a bend in the river where many years later a village called Saline City would be built. 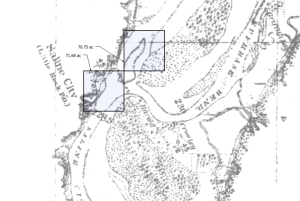 The rationale for acquisition of the properties is more apparent when viewed in relation to the location of the river during the 1800s. Similar to what took place at Arrow Rock, the river has changed course since then, leaving land that once was on a river bank some distance from the water.

The accompanying image shows the property locations on an excerpt of a map published in 1890s by the Missouri River Commission. (Note 15.) The two parcels, each containing about 70 acres of land, were on opposite sides of the main river channel. There is no indication that a ferry crossing here ever served as a rival to Arrow Rock. Based on a letter that Mary Becknell wrote at the end of 1829 (described in Part VII), it appears that the family was living here at that time. But there is no other documentation that further ties the Becknells to this particular spot in Boone’s Lick country. 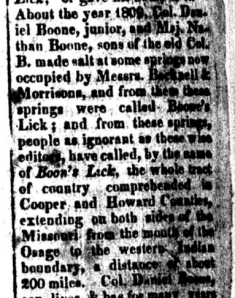 By 1819, Becknell was once again working with or for the Morrison brothers at their Boone’s Lick salt works. An intriguing document published in August of that year describes those salt springs as “now occupied by Messrs. Becknell & Morrisons.” (Note 16.)

The document was a letter to the editors of the Missouri Intelligencer and Boon’s Lick Advertiser, a newspaper published in Franklin. The letter, published anonymously under the pseudonym “Truth,” presented a spirited rebuttal of a reference that the paper had published regarding Daniel Boone and an assertion that Boone’s Lick had been named after him.

Boone, now past 80 years of age, was still alive and living with son Nathan on Femme Osage Creek in eastern St. Charles County. A complete transcription and images of the published letter is included on the page “1819 – Intelligencer Letter about Boone’s Lick.”

Following is the description of Becknell’s involvement at the Boone’s Lick salt works according to DNR exhibits at the historic site. (Note 17.)

Becknell apparently worked in a managerial role at the salt works as early as June 1819, when he published the following notice in the Intelligencer. (Note 18.)

The subscriber wishes to hire the cutting of from three to five hundred cords of WOOD, at the Boon’s Lick salt works, for which he will give Fifty Cents per cord, and board the hands that cut it.
William Becknell.
June 18.

The extent to which Becknell had any ownership of the salt works business is open to question. Surviving documents from the time show his involvement but do not conclusively establish much more than that he was working on the Morrisons’ behalf. Becknell had little apparent capital, which resulted in negotiating his labor in exchange for the use of Robidoux’s boat in 1817. Becknell also had no recourse to family funds. Neither his own family nor his father-in-law, William Chribbs, was on the scene; and his stepfather-in-law, Drury Prichard, does not seem to have accumulated wealth. (Note 19.) 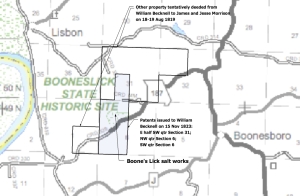 Detail map of property at Boone’s Lick described in August 19, 1819 deed from William and Mary Becknell to James and Jesse Morrison

So when, in 1819, Becknell engaged in land transactions at Boone’s Lick, these likely reflect services that he was performing for the Morrison brothers. The Missouri History Museum holds a collection of Morrison family papers that includes original deeds dated August 18, 1819, from Becknell and his wife Mary to James Morrison and Jesse Morrison. The deeds granted the Morrisons a two-thirds interest in each of the following parcels for which Becknell had acquired a certificate from the land office at Franklin:

In the same archive folder is another deed dated the following day, August 19, 1819, that describes all of these transactions in a single document. The August 19 deed was recorded. (Note 20.)

The map above shows the extent of the property described in the deed. Although the total price paid by the Morrisons to the Becknells according to the deed was $430, it is unlikely that the transaction was quite as straightforward as the deed’s language suggests or that Becknell had initiated this property acquisition without the Morrisons’ knowledge and participation. For one thing, the cost of purchasing two square miles of land must have been beyond Becknell’s resources. And the fact that Becknell retained a one-third interest suggests that the transaction was part of his ongoing relationship with the Morrisons.

Even so, what the Morrisons bought was of dubious value. Becknell was evidently able to obtain land patents for only about a third of the property. (Note 21.) The patent for the northwest quarter of Section 6 at least included the primary site of the salt works.

Becknell sold his one-third interest in these properties to the Morrisons on May 23, 1822. (Note 22.) Seven years later, as a formality, he executed another deed to them for the same property because the patents he had applied for in 1819 were not issued in his name until 1823. (Note 23.) The Morrisons continued to produce salt from the site for years, but ultimately the title that Becknell had obtained for them was determined to be no good. James Mackay, who had been granted the land by the Spanish in 1797, had died in the meantime, but his heirs finally were able to establish their prior rights to the land. (Note 24.)

Becknell’s interests in salt production, whatever they may have been, were short-lived. By 1820, with the formation of the new state of Missouri, he was turning his attention elsewhere.